HI everybody. Well its been a long time since I posted a Blog update. I've done a few linked YouTube DvD's but no actual blog updates. Soooooo I thought it was time to update all on the latest projects on  the UPBNSF Joint Division.

I held the last Ops session on the UPBNSF JD on 22nd May 2021. Then I decided I needed a break from modelling as I had been going hard at it for quiet some time and to be honest my NMRA AR Division 1 commitments were pretty insane at that time.

August came and I was feeling reinvigorated and decided to focus some attention to doing more scenery on the layout. SO I've taken on some scenery projects in the house garage area of the layout as I'm determined to have this area significantly first scenery pass completed by early 2022.

So lets dig in and I'll see if I can't share some of the scenery build processes over each area in the next couple weeks. 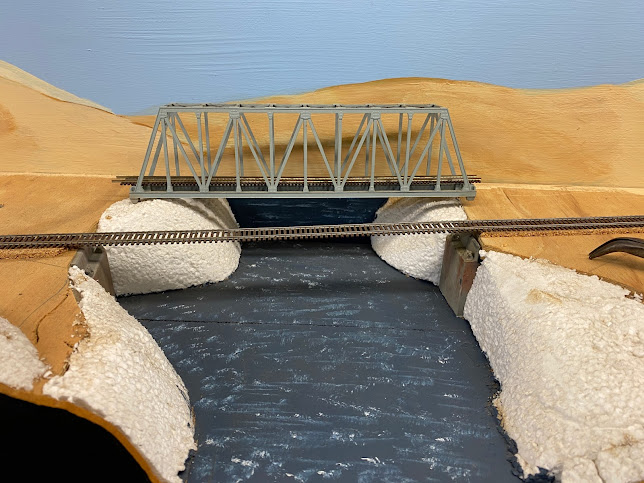 I have a bridge crossing Francis Creek at Ayer (along the Snake River). The bridge is manufactured by Kato. I removed the Kato bridge track and then installed Micro Engineering bridge track and rail. This has a closer tie spacing to the Kato track that comes with the bridge. The closer tie spacing is A typical for a US prototype bridge. After this I added guard rails, to make this scene more prototypical to what I model.
My good mate, Garry Paper then weathered the bridge and track before it was reinstalled onto the layout. 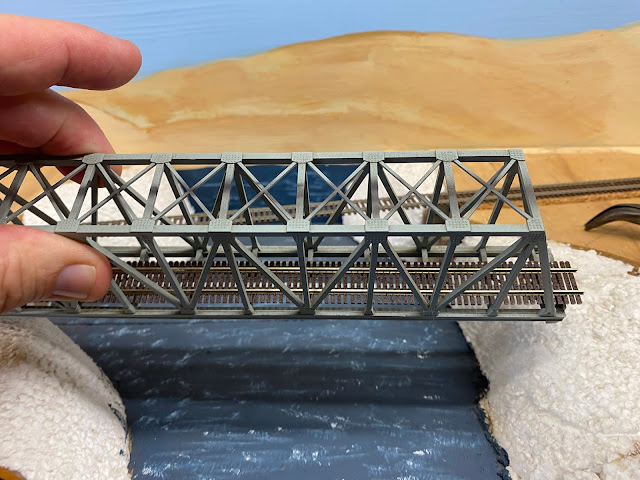 Blending the scenery into the bridge abutments would become an interesting task. 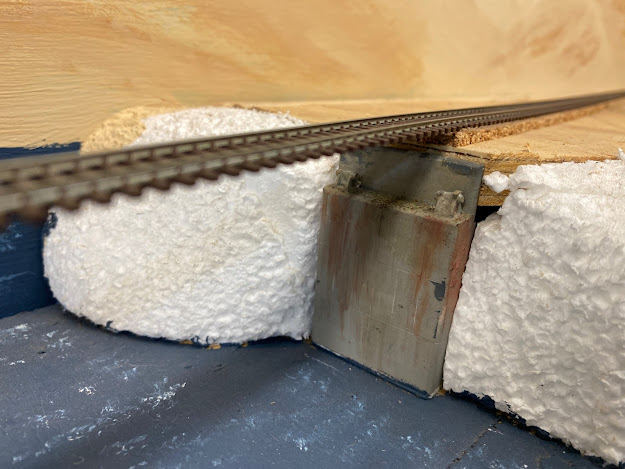 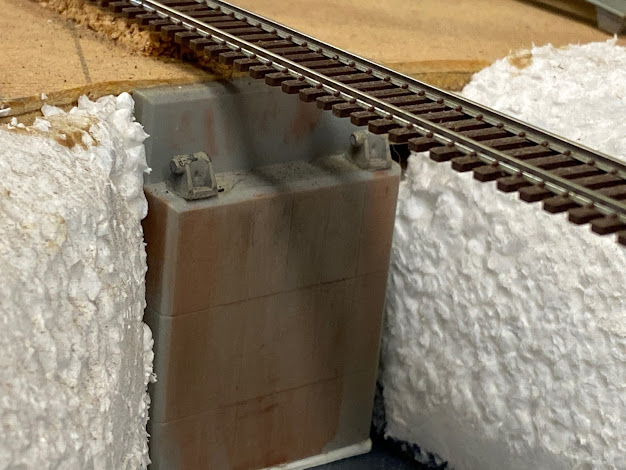 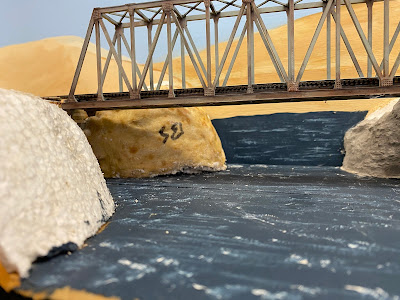 Then the task of fitout of the scenery began. Test fitting the rock moulds for fit and size to the location is all important. The hard bit would be to blend the bridge piers into the surrounding scenery and the acute angles of the river  edges. 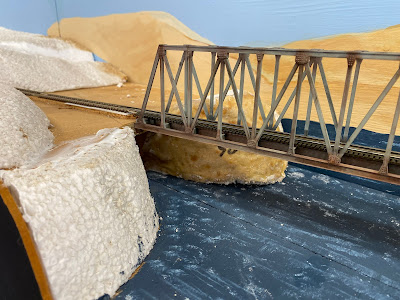 Moulds with wet plaster were applied to the scene one at a time and slowly I blended the scene into the river embankments and bridge abutments. 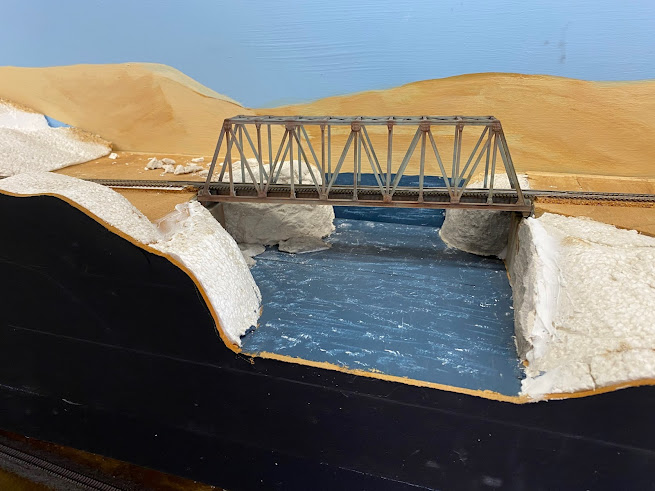 Failed moulds were broken up and some fragments were used on the river bed and earthen areas near the rivers edge. These were sprayed with Diluted Indian ink to accentuate the detail before installation. 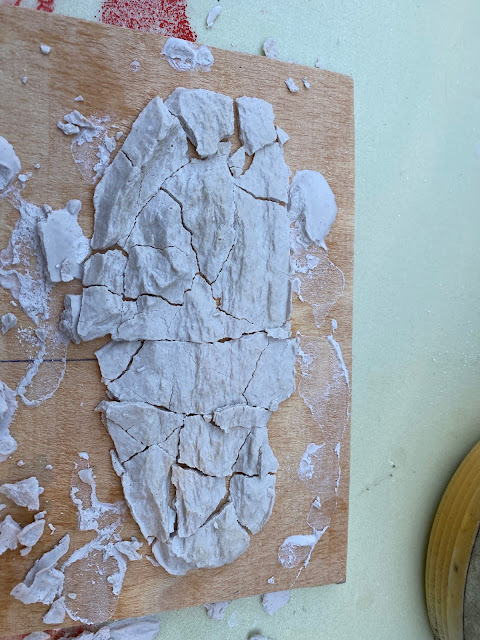 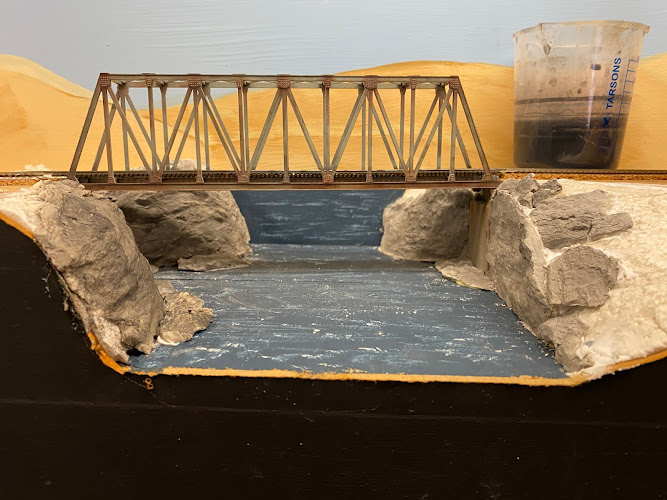 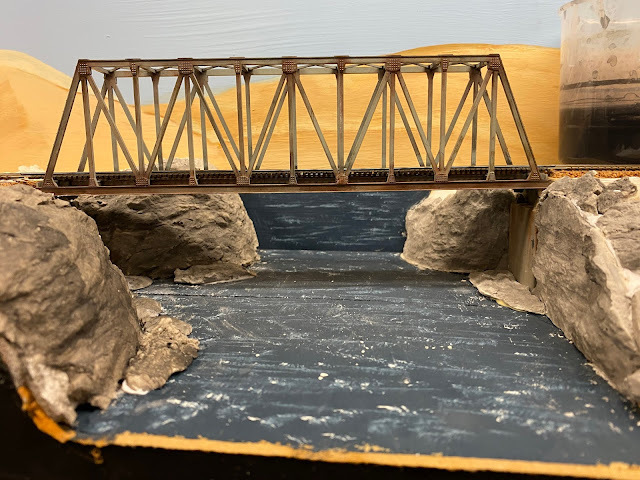 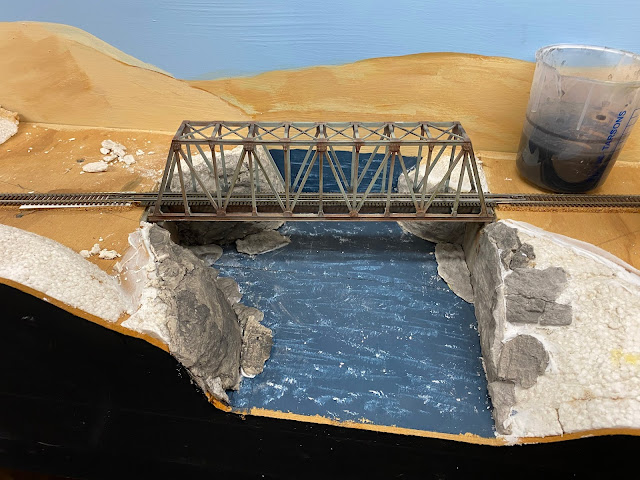 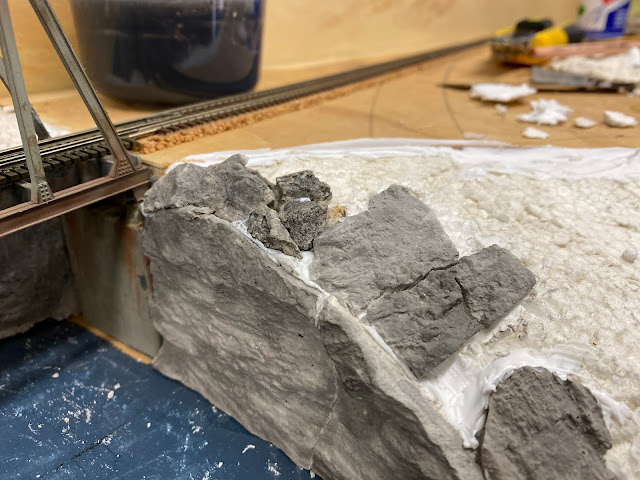 So as it stands right now, the below photos show the current status of the Ayer project to date. The longer term will see apple farms simulated either side of the bridge which is A typical of the location represented. 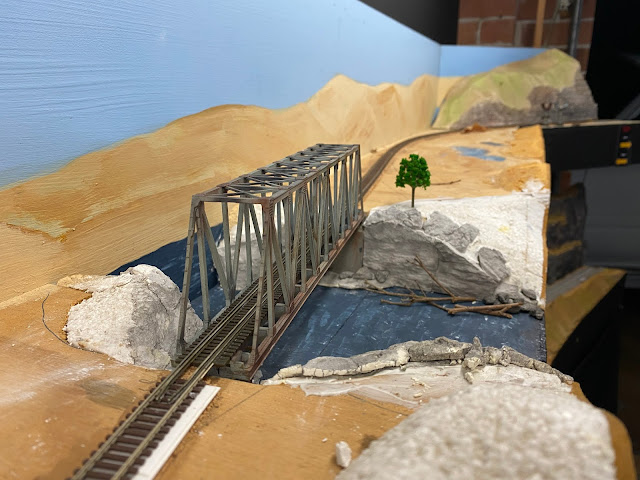 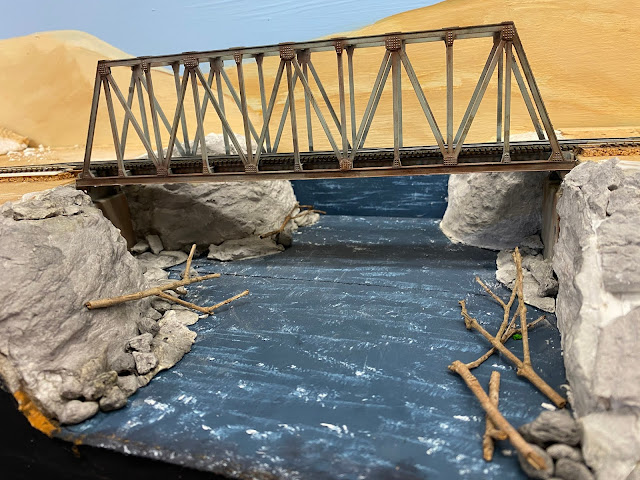 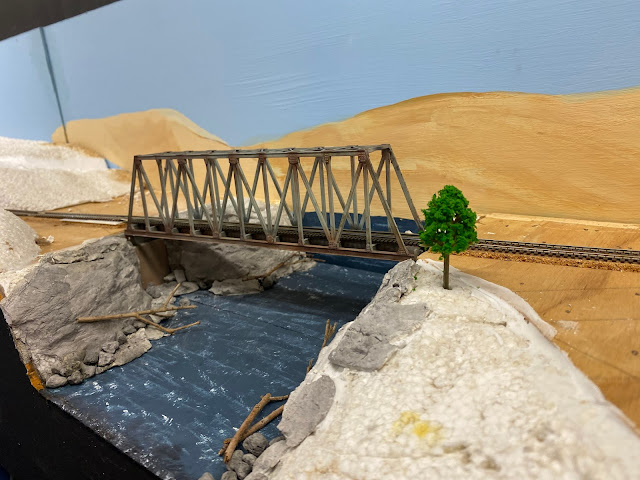 Well its been a busy two week on the layout since the last update. I've been concentrating on the trasition scene, up to the UP bridge at Nelle Bay (Formerly Nelle Inlet).

Follow the photos below and I'll take you through the latest changes!!!


WOW its been over two years since I posted on this blog!

I was sitting here and thinking what I could do to send to people, acquaintances, and internet contacts in our wonderful hobby, that could distract them in a nice way, from the current issues going on across the globe.

SO I thought that I would do a short "latest project" update so you all can see what my most recent  efforts have been aimed at. I've been working on this project for about 5 weeks now. When I started there was bare plywood and a blue backdrop behind the scene. I vaguely understood what I wanted but was struggling for artistic licence. But I forged ahead anyhow and very soon I had a clear vision on how it was all going to come together. Thats the beauty of this hobby. Jumping in can be the best thing!!!!!

Yesterday afternoon I held the scheduled 2 monthly operations session on the UPBNSF Joint Division. There were 16 starters for the session.


The session commenced at 2:30pm with the official opening of the Rogers Run branch line. A small opening ceremony was held, with the official cutting of the SIGN by no other than ROGER. In recognition of this momentous occassion , the UPBNSF JD management had a directors special available for the first run out to the PGE power plant and back. 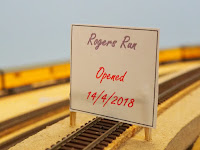 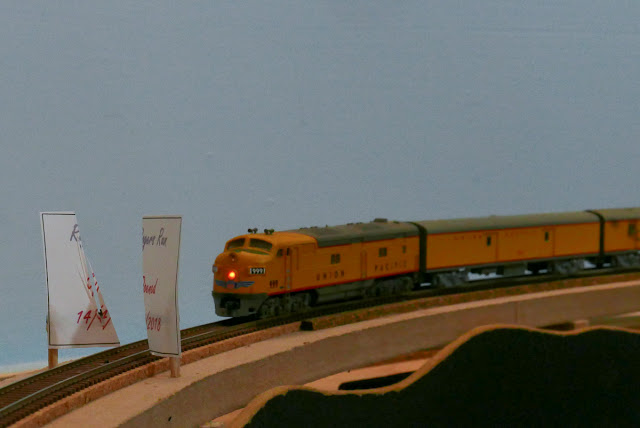 Upon completion of official ceremonies, the pre-start was held and then we proceeded to get into the operations session. We ran 22 trains for the session and considering that some of these trains take 2 hrs to complete that was no mean feat!! Just ask Steve O and John B how long the Millwood turn takes!!! 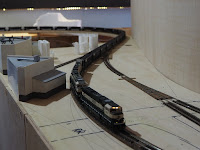 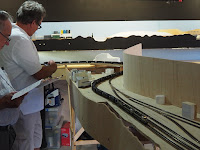 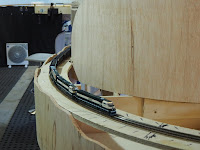 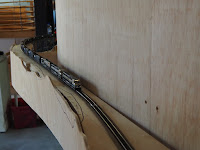 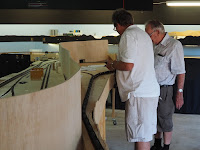 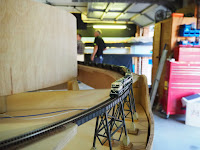 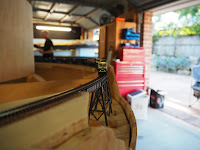 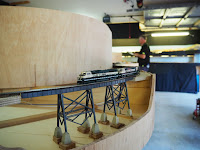 Operations ran from 3:00pm to 6:30pm where we stopped for Pizza. Some said their good byes for the night and a few guys stayed on to do another hr of ops.

The night wasn't without a couple of issues. The premier train on the layout, the UP Potash train had multiple (and I mean multiple) uncoupling issues and the engines, all equipped with sound decided to play up going up the spiral. Considering this is the most expensive train on the layout in real dollars ...yours truly is not happy!!!! I've been onto the manufacturer of the potash cars regarding the uncoupling issue previously but to date have not had any success in remedying the problem. They are MT 1015's and the reliability on this freight car is abysmal.

I also had a similar issue with a unit grain train. On this occasion I just think the weight of the grain train cars is just way to light, so I'll try and address that issue over the coming days.

All in all outside of those frustrations, the ops session went pretty smoothly. Everybody seemed to enjoy themselves and the effort put into the paperwork side of administering the ops session is starting to pay off.

Photos below of Ops session. 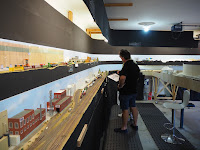 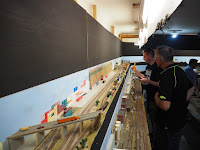 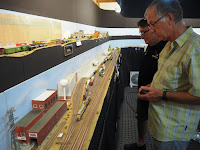 Thanks to all the participants. looking forward to the next ops in June.